skip to main | skip to sidebar

Virginia thinks someone's neglecting this blog, "What's up in the garden?"

The beds are "full up," as some folks say, waiting for the hard red winter wheat to ripen in three remaining beds so we can harvest it for glutenous baking and plant some more summer crops. Last October, after learning about the importance of maintaining a strong connection between the underground soil structure and the air, I planted organic wheat everywhere other crops weren't growing. As the wheat grew, I began to wonder if I'd made a big mistake. How would I remove the ground cover to make way for early spring plantings?

Somewhere I read that if I mowed it down when it reached the soft dough stage (when seeds have begun to form), it wouldn't continue to grow (like grass does). So when I noticed seed heads, I began using the new scythe I bought last year. 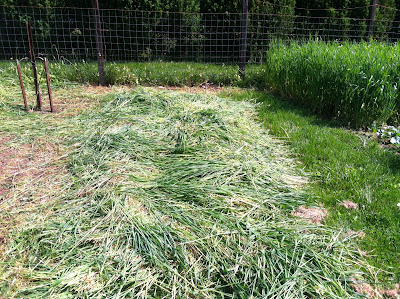 After putting the hay in windrows, shifting it around a few days, tying it up, and sticking it in a barn, I began to plant between the rows of stubble, adding mulch here and there. 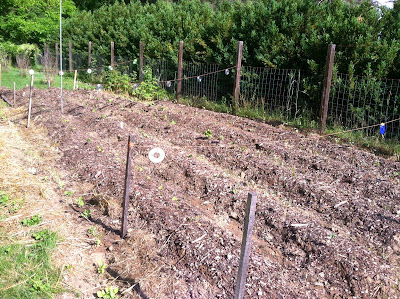 That worked okay until I realized sweet potato slips would soon arrive. How was I going to prepare the hills? I didn't want to dig up the soil and mess up the structure I'd planted the wheat to protect.

Light bulb! I'd bring topsoil from our field, down by the riverbank. Maybe that would work. 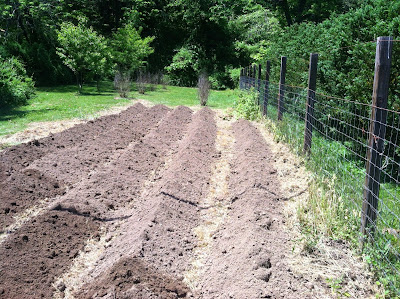 A week after the slips arrived, here's the sweet potato garden. 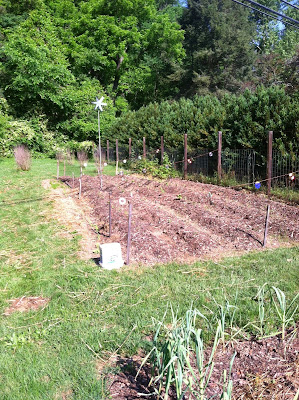 "What are the stakes for?" says Virginia. "And what's with the little windmill?" Oh my. Talk about frustration. Each morning after planting 175 sweet potato slips, 25 of 7 different varieties, I'd discover some were being stolen, by crows or voles I wasn't sure. Probably both. I'd replace them and the next morning, ditto. If you look closely, you might see several things: (1) sparkling CDs to scare away the birds, something that's worked well with my corn plantings; (2) mousetraps (zero caught to date, so don't fret too much, my PETA friends); (3) a fine mesh fence; and (4) a "mole-chaser" windmill I moved from another bed (supposed to make a noise when the wind blows and send vibrations that discourage certain varmints). Things have been going nicely since I installed the fence, knock on wood.

About that soft dough stage idea. Either it's not true, or I didn't wait quite long enough. 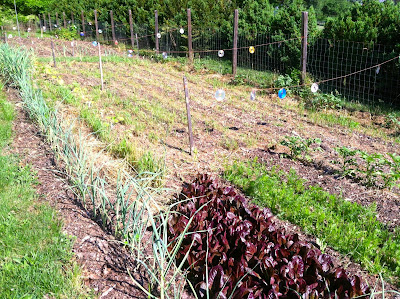 See the little grass-like stuff growing between rows? I guess I'll keep it trimmed as living mulch and see how that works.

I recently read Teaming with Microbes by Lowenfels and Lewis, and The Market Gardener by Fortier. Good reads for gardeners, but after setting them aside I decided I know nothing about gardening. All I am is an experimenter, and a not very scientific one at that.

Oh well. Here's a new raised bed in a corner of the gardens. 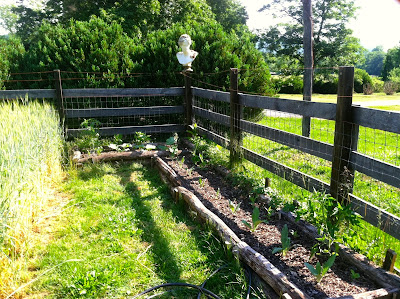 I hope to train three tomato plants (one at each end and one in the corner) to crawl along the fence. At the far end you might be able to see three Victoria rhubarb plants (started from seed this spring), a couple four o'clocks, and some celeriac. Along the right are 9 artichokes (might be a bust, but fun to try; ho-ho -- thanks to Mike and Laura though she probably won't last long in the elements), some lemongrass, Irish poets, and more four o'clocks. 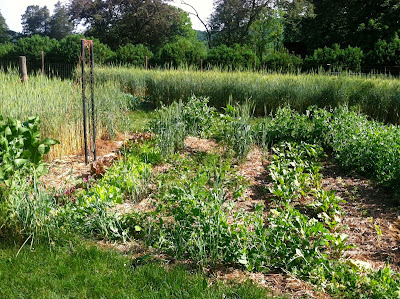 "That looks a mess," says Virginia. Not to me. I prefer crammed diversity. On the left, you'll see this bed is still half-planted in wheat, with some horseradish. Moving right, you'll find three rows of lettuce (flame, oak leaf, and tennis ball), some potatoes (volunteers), carrots, sunflowers, beets, nasturtiums, cleomes, four o'clocks, chives, and Wando peas (the kind you shell, lots of work, but a favorite of mine).

By the way, I usually let volunteers grow. I figure they deserve a chance, since they offered. But those volunteer potatoes tend to entertain a lot more Colorado beetles than planted (rotated) potatoes, so I watch them closely and do the squish remedy (not that my fingers aren't yellow when it comes to planted spuds). 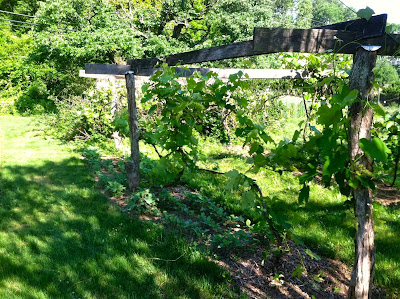 I'm really bad at grapes, but this year, so far, so good, loaded with little grapes. Partly as an attempt to cut my losses, I've kept them weeded this spring, except instead of weeds I planted greens (collards, kale), rutabaga, beets, and a couple cucumbers underneath. We'll see how that goes. 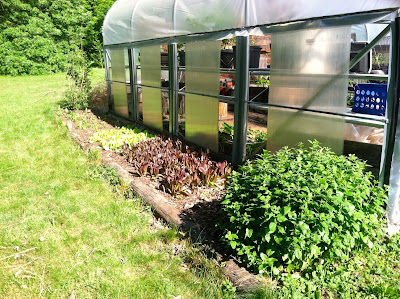 All right. The last picture shows a raised bed on the south side of the greenhouse, with a chasteberry tree, spinach, romaine lettuces, basil, and lemon balm. Inside the greenhouse, in ground beds, we have carrots, lettuces, kale, parsley, cilantro, tomatoes, cucumbers, and several winter squashes. On its shelves sit flowers and eggplants (need to get bigger to withstand the inevitable flea beetles), both waiting to be transplanted, orange trees, and pomegranates (to replace bushes in the outdoor grove if problems arise; they made it through last winter's one degree fahrenheit evening but lost most of their past above-ground growth).
Posted by James Pannabecker at 11:45 AM

James Pannabecker
When I look back thirty years I wonder how I got here. I did not expect my future, I did not plan it. I knew the dreams I had were fiction, opera singer, professional basketball player, orchestra conductor, Supreme Court justice, father of six or seven. My short-term goals were something less, chosen just before each gentle turn I charged with focus down the line. Then something happened, I shifted right, then left, then right again, and I landed exactly where I wish I had dreamed I would be today.